This is my dog, Honey: 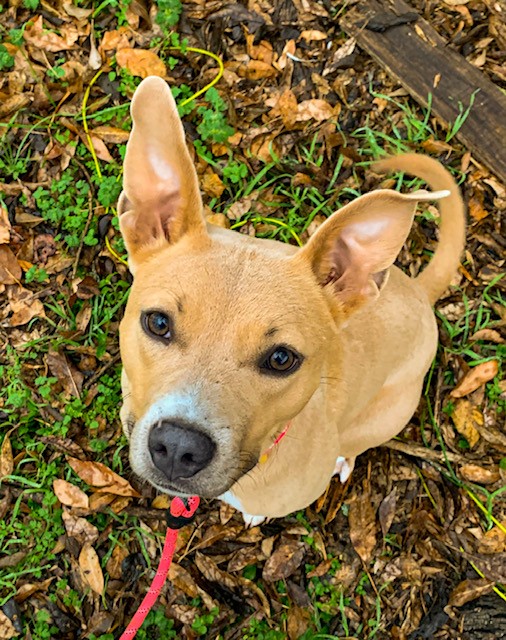 I adopted her from the Humane Society of New Braunfels.

I adopted Honey from HSNBA on December 23rd, 2019. After our family dog, Sheba, died in October, we decided we were ready for a new family pet. I went to HSNBA several times looking at different dogs and walking them, but I never saw a dog named Honey, who I had seen on their website. Finally, after going for a third time and having walked at least five other dogs, I asked about the dog I saw online. They took me to a back area where they had dogs that hadn't passed their 'friendliness' testing yet, and there she was. They said they had her in the back because they ran out of room in the front because they were overloaded with dogs, but that she was ready for adoption.

In order to adopt Honey, the volunteers told me I'd have to bring in our other dog, Darby, to a meet and greet with her. I brought Darby in 2 days later, as they said that there was one other family interested in Honey but they had 24 hours to decide. They never came back for her, so I brought Darby up and although things were rocky at first, I knew Honey was coming home with me. I paid a $60 adoption fee and my mom drove up home with Honey in my lap, happily sticking her head out of the window.

Since adopting her, she hasn't really left my side. I've never had a dog sleep in my bed before but Honey didn't want to be anywhere else. I take her to the dog park every weekeend and she makes friends with local dogs, although she's usually small in comparison at only 28 pounds. People are always asking me what kind of dog she is and even though the shelter told me she was a pocket pitbull, they weren't too sure either. Whatever she is, she's been a great companion and cheers me up when I'm feeling down. She has no sense of personal boundaries but I wouldn't have it any other way. I'm so excited she's in my life and I can't wait for all the adventures the future holds for us.